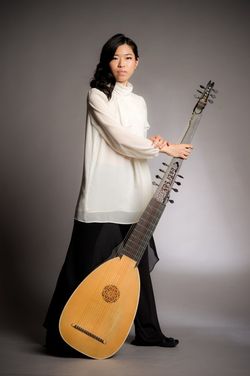 The Japanese lutenist Asako Ueda began playing the violin when she was five years old. She studied the violin at the Toho Gakuen High School and the Toho Gakuen College of Music in Japan. After finishing her Bachelor, she continued at her college to study the Baroque violin with Ryo Terakado and composition with Masahiro Ishijima. She started playing the lute while in college.
In 2016, she gave her first solo recital and she was well-received. The same year, she moved to the Netherlands and she is currently studying the lute and the theorbo at the Royal Conservatory of The Hague with Mike Fentross and Joachim Held. She took part in a CD recording with Ensemble Contraponto (Japan) conducted by Tetsuro Hanai and she is a member of La Musica Collana (Japan), Petits Violons (Japan), Ensemble Irene (Japan), Ensemble Muromachi (Japan) and IJ Space Ensemble (Holland), who are going to release a CD on Claves Records in 2019. She have played in several music festival like Chofu music festival (Japan), Veenhuizen (Holland), Monteverdi XL(Holland), Utrecht early music festival ¡°Fabulous fringe concert¡± (Holland), MAfestival Brugge fringe concert (Belgium).